Although this is filed under “starters and snacks”, we usually have it as a meal. It is a common Indian street food and is a simple one to make. The bhaji freezes well and so it’s a good idea to freeze a batch or leftovers when you want a quick snack another time or when you have guests coming over at short notice. With the bhaji ready, all you’ll need are the pav (buns) and the garnish. It’s a great dish to make with both children and adults and sharing the garnishes makes it interactive and a fun way to eat together.

There’s not always this many vegetables, so you can reduce 1 or two of these if you like. I also use less potato and more cauliflower than the traditional recipes as I prefer the texture that way. But you can make it as you prefer and adjust the seasoning accordingly. I like the taste of wholemeal pav, but you can use the traditional white flour buns if you prefer, or any other type.

How to make it:

I personally like to have this only on one pav half, but you can arrange it with the other half on top if you prefer to eat it like a pav sandwich 🙂 I love putting Sev on top for the crunch along with the other soft textures. 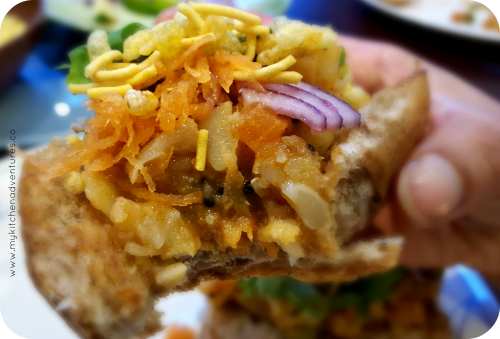